Panama City Beach, Florida – Georgia Tech shot an 11-under 277 on Monday, led by a 68 from Bartley Forrester and a pair of 69’s Ross Steelman and benjamin ruterand took a six-stroke lead over Virginia Tech after 36 holes at the Watersound Invitational.

The 17thand-The ranked Yellow Jackets are looking for their third tournament win of the 2021-22 college year and first of the spring. Competing with four other teams ranked in the top 25 of Golfstat’s current rankings, nine in the top 50, Tech will be paired with the Hokies and No. 4 North Carolina for Tuesday’s final round at 10:40 a.m. tournament is played at Shark’s Tooth Golf Club, the golf course that will host the ACC Championship in April.

Forrester, a junior from Gainesville, Georgia, birdied on four of his first six holes and added three more on the way to his 4-under 68, which lifted him into a tie for second place. individually at 5 under par 139. after 36 holes.

Reuter, a freshman from Naarden, Netherlands, played a bogey-free round with two birdies on his front side and one on his back for his 69, while Steelman, a junior from Columbia, Mo., had played his back nine 3-under to complete his 69. Steelman is tied for 10th individually at 142 (-2), Reuter tied for 18and at 143 (-1).

Howe birdied on five holes to block four bogeys for his 71, and is tied for sixth after 36 holes at 3-under par 141.

Tech birdied 23 in Monday’s round and leads the field with 43 over 36 holes, and has a two-shot homecourt advantage in scoring on par-4 (-2) holes.

Bartley Forrester led the way for Tech Monday with a 4-under 68, moving into a tie for second place individually. (photo by Ross Obley)

INDIVIDUAL CLASSIFICATION – Canon Claycom, the first-round leader after a 67, followed with a 66 on Monday to keep his lead at 11 under par 133. He is two strokes ahead of Forrester of Tech, Connor Burgess of Virginia Tech and Frederik Kjettrup of Florida State , who are tied for second at 5 under par 139.

Austin Greaser of North Carolina is alone in fifth place at 140 (-4), while Howe of the Yellow Jackets is tied for sixth at 141 (-3) with Jacob Bridgman of Clemson, Palmer Jackson of Notre Dame and David Ford of North Carolina. 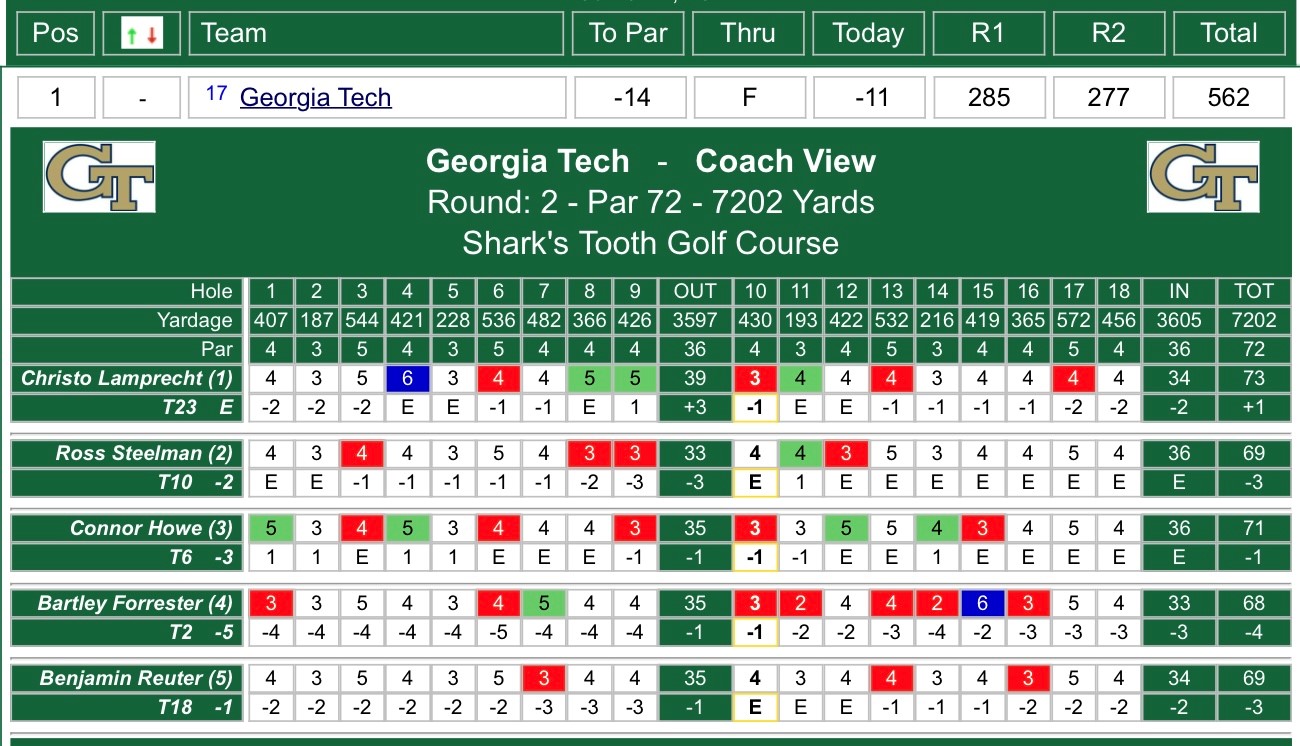 TOURNAMENT INFORMATION – Georgia Tech is participating in the Watersound Invitational for the second consecutive year. The tournament follows the traditional 54-hole, 5-stroke, 4-stroke collegiate format, with 18 holes each Sunday, Monday and Tuesday. This year’s event will be played at Shark’s Tooth Golf Club, a 7,202-yard (par 72) venue that will also serve as the venue for the ACC Championship in April.

That tournament was held in mid-January a year ago, the Jackets’ first tournament in a busy spring schedule that followed a COVID-induced inactive drop. Tech finished seventh in a limited 10-team field that included all ACC teams. 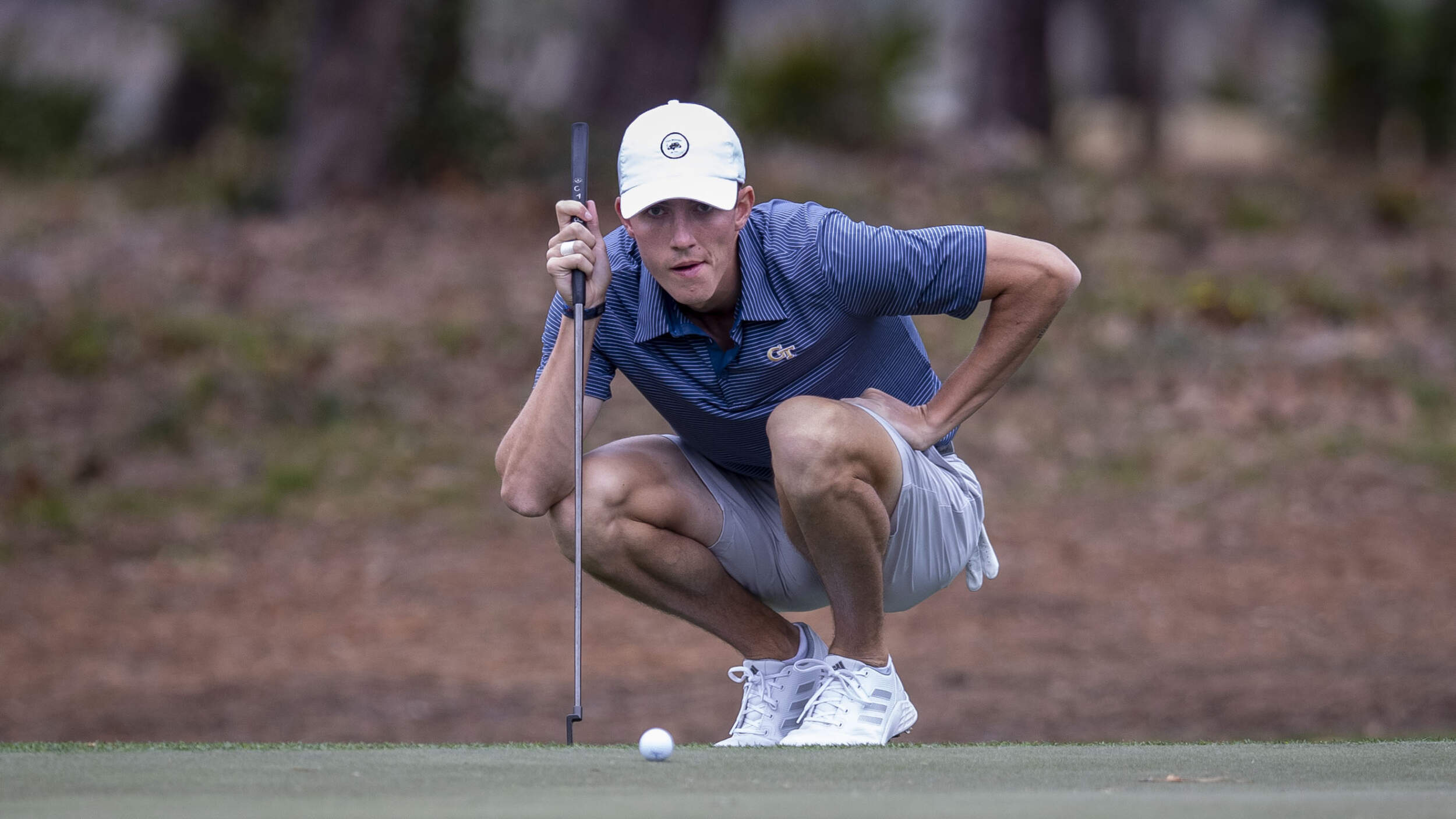 Ross Steelman moved into a tie for 10th after his 69 on Monday. (photo by Ross Obley)

Georgia Tech’s golf team is on its 27thand year under head coach Bruce Heppler, winning 67 tournaments during his tenure. The Yellow Jackets have won 18 Atlantic Coast Conference championships, made 29 NCAA championship appearances, and been national runners-up four times. Connect with Georgia Tech Golf on social media by liking their Facebook page or following on Twitter (@GTGolf) and Instagram. For more information on Golf Tech, visit Ramblinwreck.com.