Surf the 50-Miler wave consisted of three stages: two checkpoints at miles 10 and 31, plus the finish line. Directions and route map were unknown for each leg until we got to the checkpoints, where we were given directions and maps on laminated maps to help us move on to the next leg. The thing is, you had to follow the directions, it wasn’t an orienteering race.

In the adventure racing style, there were no aid stations, but you had the option of using a crew that followed and supported you throughout the course. I chose to run unmanned, or independently, which meant I was out there fending for myself when it came to everything from water and ice to Coca-Cola – oh, and the directions. The great thing about urban shopping is that gas stations and supermarkets are easy to find.

If you’ve lived in South Florida, you know the heat and humidity, which is nothing short of oppressive and suffocating. Departing at 6 a.m. before dawn it was clear we were going to have a scorching day. At a mile and a half, I was already drenched in sweat. At 9 a.m., the heat was overwhelming.

My longtime running buddy William “Chip” Corley and I had agreed to run together which was lucky for me as he is faster and still pushes me. And because I had two collapses: the first being more of a mini heat collapse because I was able to recover after Coca-Cola and ice, and continue to push. The second collapse hit harder and there was no way to disguise it.

When we started on the long bridge towards South Beach I felt bad (pissed off and dizzy) but stayed silent until, less than a mile from South Beach, a real headache started. , accompanied by chills and fatigue. Finally I was seated and when Chip came back to me he knew I needed help. He ran to a fancy bar for help, and after a few soda and ice cubes, I was fine again.

It’s raining, then there’s the South Florida downpours. Around mile 30, as we were on the Venetian Causeway towards downtown Miami, the downpour hit us hard. After all the heat, it was a relief. Until we get soaked and cars driving through puddles flood us more. My feet were soaked because there was no way to avoid the puddles. On the plus side, it was still hot, and being hot and drenched is definitely better than being cold and drenched. The more it rained, the more I gave in – the big sloppy mess of this one – and I was grateful for the sun’s respite. 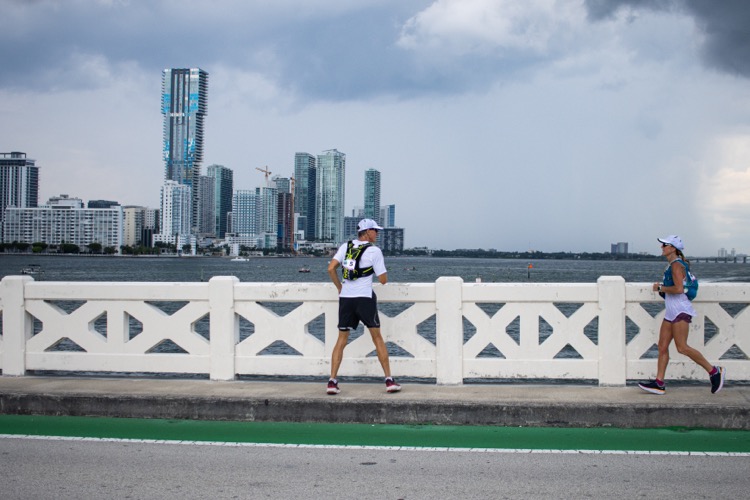 When my watch registered 45 miles, the finish line became accessible. We passed another runner, Lucian Boulet, a few miles back, and together we hiked the course. At one point, we started to doubt that we were going in the right direction. When we finally saw the lights come on in front of me (US 1) relief overwhelmed me and we made our way to the parking lot where we had started about 15 hours earlier. In the end, we won the Dead Finish Last (DFL) award.

So much in the world is complicated and confusing now – political and social unrest and a pandemic. The races bring me back to basics. They remind me to put one foot in front of the other and be there for others.