The Yellow Jacket trio are looking to return the Havemeyer Trophy, given to the champion, to the Tech campus after Andy Ogletree and Tyler Strafaci won the title back to back in 2019 and 2020. Matt Kuchar won the championship in 1997, and Bobby Jones was crowned five times between 1924 and 1930.

The championship begins with 36 holes in stroke play Monday and Tuesday at Ridgewood Country Club and Arcola Country Club in Paramus, with each of the 312 players playing a round on each course. The top 64 finishers, with playoff ties resolved if necessary, will begin match-match competition on Wednesday, culminating in a 36-hole championship match on Sunday. All games will be played at Ridgewood.

A co-medalist in the United States Amateur Final Qualifier at the Standard Club in Johns Creek, Georgia in late June, Forrester is on the court for the second year in a row. Ranked No. 75 in the World Amateur Golf Rankings, the senior from Gainesville, Georgia, won the Monroe Invitational and is tied for sixth in the Southern Amateur in his last two starts.

Lamprecht, ranked No. 42 in the WAGR, is on the court for the first time, earning his spot last Monday based on his top-50 position. The junior from South Africa’s George led the international team to victory in the Arnold Palmer Cup and finished tied for ninth at the European Amateur Championship earlier this summer.

Steelman, ranked No. 25 in the WAGR, advanced to the 2021 US Amateur quarterfinals in Oakmont, Pa., earning a round trip this year. The Columbia, Mo., senior was the 72-hole stroke play medalist and won their first-round match at last week’s Western Amateur, and was also the runner-up in stroke play and won their first round at the North & South Amateur in early July.

Ridgewood Country Club will be at 7,487 yards and play a par-71 for the championship, while Arcola Country Club is a par-70 at 7,256 yards. A total of 7,749 players entered the championship, with all but 63 qualifying from 94 different venues to fill the field of 312 players. James Piot of Canton, Michigan was the 2021 champion.

The US Amateur wraps up what has been a successful amateur season for Georgia Tech golfers. Besides Forrester’s win at the Monroe Invitational, senior Andy Mao won the Southeastern Amateur in late July and junior Aidan Kramer won the Rice Planters Invitational in June. Senior Connor Howe won the Patriot All-America Invitational in December.

Bartley Forrester, senior, Gainesville, Georgia – Ranked #75 in the World Amateur Golf Rankings, #41 in the Scratch Players Amateur Rankings on the eve of the NCAA Championship, jumping over 150 spots over the spring and summer… Won the Monroe Invitational in Pittsford, NY , by three strokes with an 11-under par score of 269; holeshot 72 yards for an eagle-2 on the par-4 17th hole to secure the victory … Tied for sixth at Southern Amateur in St. Simons Island, Georgia (271, -13) … Qualified for American Amateur for second time, was co-medalist at US Amateur Qualifier in Johns Creek, Georgia with rounds of 67-69 (-8) at Standard Club… Finished third at Dogwood Invitational in Atlanta (272,- 16) … Tied for 30th at Western Amateur in Highland Park, Illinois (284, par) … Honorable Mention GCAA All-America, All-East Region and All-ACC performer who had the best year of his career, posting four top-10 finishes and three more top-20 finishes in 11 events… Achieved All-America status with a top-15 finish in the NCAA Championship, posting a 286-over-par total with a Closing 68… No. 81 Golfstat and No. 69 Golfweek/Sagarin Index, highest po positions of his career… Has two collegiate victories – the 2022 Calusa Cup and the 2020 Puerto Rico Classic.

Christo Lamprecht, Junior, George, South Africa – No. 42 amateur player in the world according to the World Amateur Golf Ranking and No. 50 in the Scratch Players World Amateur Ranking (as of August 10, 2022) … Named to compete for the international team at the 2022 Arnold Palmer Cup through July, and for Team South Africa to compete in the 2022 World Amateur Team Championship in Augusta… Tied for ninth at the European Amateur Championship in Valencia, Spain (287, -1)… Made it 3-1 in his games to help the International team beat the United States team, 33-27, in the Arnold Palmer Cup in Switzerland; won both of her mixed foursomes matches with Heather Lin of Taiwan and defeated 15th-ranked Travis Vick of Texas, 3&2, in her singles match… Third Team All-American by Golfweek magazine, honorable mention from the Golf Coaches Association of America…Also made the All-ACC team and earned GCAA All-East Region honors with six top-10 finishes in 12 events, including a tie for third in championship stroke play of the ACC (205, -11)… Won his two individual games, 1-up over Michael Sakane of FSU and 5&4 over Mark Power of Wake Forest… Ended the spring as Tech’s highest-ranked player in the nation – #27 by Golfstat and #27 in the Golfweek/Sagarin Index.

Ross Steelman, senior, Columbia, Mo. – Ranked No. 25 in the World Amateur Golf Rankings and No. 10 in the Scratch Players World Amateur Rankings … Finished 10th in the Elite Amateur Series rankings … Medalist in stroke play at Western Amateur in Highland Park, Illinois (270, – 14), won his round of 16 match against Adrien Dumont de Chassart, 5&4, before losing in the quarterfinals to Travis Vick, 2&1… Tied for second place in stroke play (69-66, -9) North & South Amateur of Pinehurst, NC; advanced to the round of 16 in match play after beating Joshua Bai (2-and-1) in the first round…Tie for 11th at Sunnehanna Amateur in Johnstown, Pa. (280, even)…Tie for 33rd at Southern Amateur in St. Simons Island, Ga. (277, -7) … Recorded six top-10 finishes in 11 starts, including a second-place finish at the NCAA Columbus Regional (206, -7) and a sixth-place solo finish in ACC Championship stroke play (207, -9) … Halved his ACC semifinal game against Florida State in 19 holes (unfinished when Tech picked up the third point in another game) and lost his Final 1 match against Wake Forest’s Michael Brennan… Finished the spring season ranked 141st in Golfstat and #114 in the Golfweek/Sagarin Index. 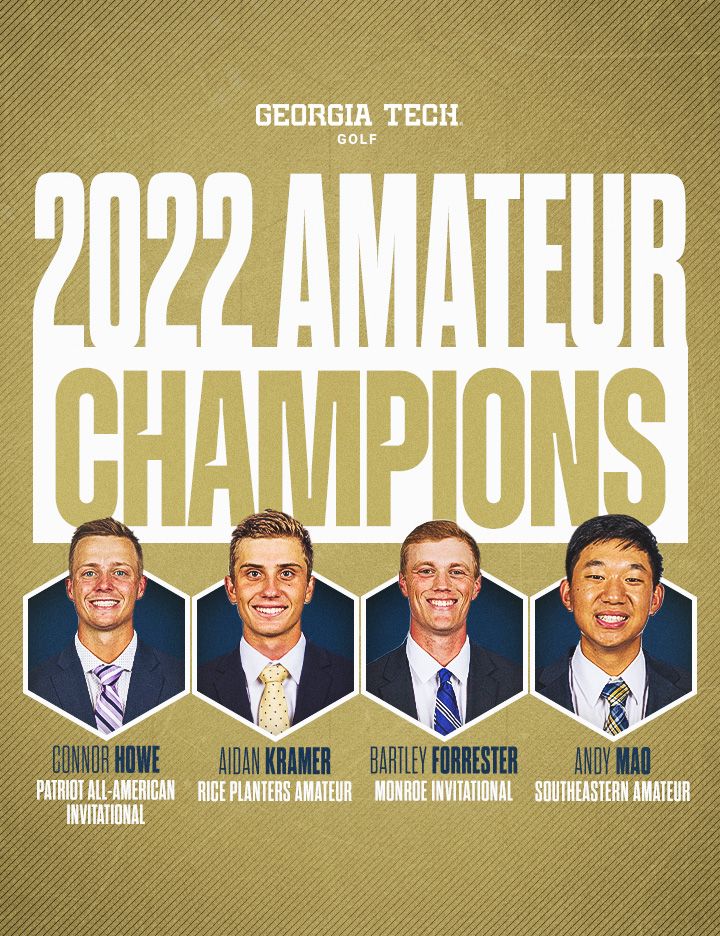