St. Thomas University’s Mock Court punched above its weight this year, finishing in the Top 8 in four competitions at the law school level.

Based on outstanding past performance, the STU team has been granted special permission to attend law school events including the Stetson International Environmental Law Moot Court, Monroe E. Price Media Law Moot Court, and Manfred Lachs Space Moot Court, and were the only undergraduate team competing.

“It’s a competitive process within law schools to be part of the advocacy teams. Providing students with an experience that is not guaranteed in law school is something that will give them a competitive edge when applying to law school,” she said.

“STU Moot’s strong performance at each of these law school events shows how good our litigators are, not only at oral argument, but also at writing advanced legal briefs that are required for each of the competitions.”

Emily Green and Ashley Thornton traveled to Florida for the Stetson International Environmental Law Moot Court after winning the North American round of the competition in February.

The duo competed against the University of Illinois at Chicago, the Law Society of Ireland, the Universidad de Nacional Autonoma de Mexico and the University of the Philippines. They lost in the quarterfinals to finish in the Top 8, and Green placed third among all speakers at the event.

“The other contestants were very surprised to learn that Emily and I were undergrads because of our success,” Thornton said. “I think it speaks to the caliber of the STU Moot Court program and how poised we are to succeed at such high levels of competition.”

It was the first time Thornton and Green had been able to attend an event in person, and while there were some additional nerves, it was a memorable experience for the duo.

“It was certainly daunting to argue directly in front of the judges and have opposing counsel in the same room,” Thornton said. “I was nervous about competing in person for the first time, but ended up loving it even more than the virtual competitions I’ve entered.” 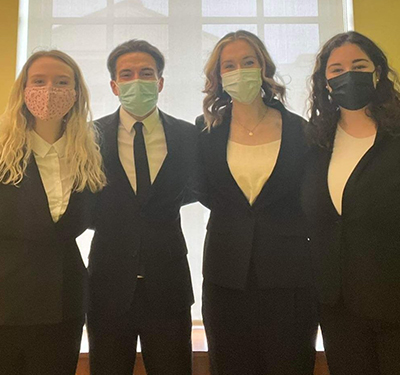 STU litigants Kassandra Trainor, Adelaide King, Patrice Cammarano and Maggie Jardine finished in the top 8 in the North American round of the Monroe E. Price Media Law Moot Court in Oxford hosted by the Cardozo School of Law.

“Competing in teams of four made the transition from undergraduate to law school a lot easier,” Trainor said. “Practicing with teammates playing on the other side helped us better anticipate what opposing counsel might argue.”

STU litigants faced off against Cardozo School of Law, the University of Pennsylvania and Osgoode Hall, where they debated issues relating to free speech and voting and election rights.

“This opportunity has left me with a sense of preparation for when I go to litigate at the law school level, and the confidence that I am ready to do so with the resources and skills I have acquired as a STU litigant,” Trainor said.

“The highlight of this competition was being able to see the months of preparation with my teammates pay off and showing that our advocacy is at law school level.” 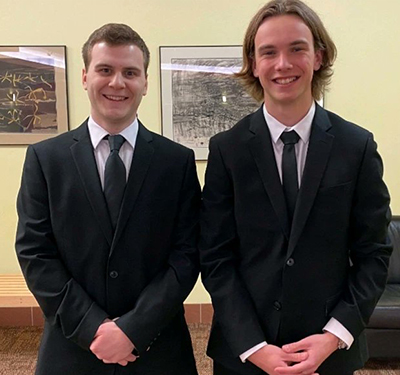 Oliver Larson and Ethan Nylen represented STU in the North American round of the Manfred Lachs Space Moot Court competition, where they argued a case regarding registration and damages involving objects made in space.

The duo advanced to the quarterfinals of the competition but lost two points to the George Washington School of Law.

“The highlight of the competition for me was learning about space law,” Larson said, “because it’s a pretty unique aspect of international law that I would otherwise be unlikely to learn. “

For Larson, finishing in the top 8 at the event — along with the rest of STU litigants this year — is a testament to the preparation and hard work put in by those involved in the program.

“Preparing for and participating in the Space Moot competition was unique because of the vast difference between understanding and arguing international law versus US constitutional law,” he said.

“I think the STU mooters have done particularly well this year because the STU Moot Court is very good at preparing students for competition and we had some very good competitors this year.”

The STU Moot Court will participate in two other events this year: the Nelson Mandela World Human Rights Moot and the Nuremberg Moot Court.

The Nuremberg Moot Court is scheduled for July 1-15 and will be hosted online.